If you have the budget a curved ceiling can add sophistication, and polish to a rectangular retail department or room. When used in a small space, perhaps 1000 square feet, the ceiling can be held back from the wall allowing for a cove and creating all manner of design possibilities. The cove frames the room and adds focus to the walls, and the curve, if the ceiling is white or reflective, offers a more subtle option by placing indirect light on merchandise displayed in the center of the room.

I worked on the boutique in the drawings above. Capturing the light while hiding the fixtures was a big priority. Not only is the cove perfect for this, but it also has a directional quality which points to the merchandise along the adjacent walls. 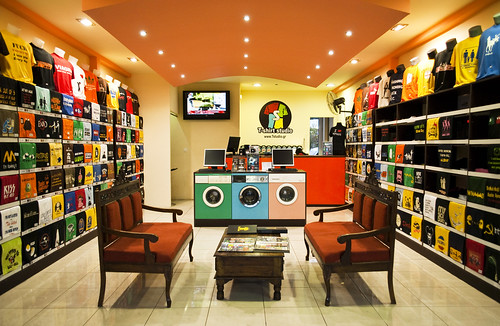 The best way to know that this tea shirt shop got it right is to imagine what it would look like without the curved ceiling. One quickly realizes that by softening the environment with warm indirect light reflected off of the colored ceiling, the design is performing as noted above and more. Hard to believe the place is selling tea shirts. They can probably charge more just because the ceiling looks expensive.   Photo used with permission from Gareth Scanlon, photographer.

Bridget Gaddis, is a Licensed Architect and LEED-accredited Professional practicing nationally, and locally in the Washington DC area. She holds professional degrees in both Architecture andInterior Design, and with a comprehensive background in commercial retail design, planning and construction has completed projects for such for such well known brands as Chloe, Zegna, and Bvlgari. Her career began in tenant coordination and site planning for two well-known Cleveland developers, followed by six years in store planning for a national retailer. After a move to New York City in 1997, she spent the next years working for architecture firms specializing in retail projects. In 2011 she started her own practice in Alexandria, VA. Ms. Gaddis is the author of two blogs dealing with architectural subjects.